I'll be reading from the *sequel* to My Inflatable Friend on Sunday, March 9, at 2 pm at Barnes & Noble on the Santa Monica Promenade. And speaking of book events...

Authors complain that their publishers and agents won't return their calls. So the recent experience of my friend Tom Page is a delight to behold. UK publisher Trashface was so obsessed with reissuing Tom's fantastique thriller The Hephaestus Plague that they literally tracked him down. Apparently unable to locate him via conventional means, the dauntless publisher ran a genealogy on him, which not only succeeded in finding the target but also links his bloodlines to King Edward III!

I caught up with Tom last Saturday at Dark Delicacies Bookstore in Burbank, where he was signing copies of the book, a creepy tale of fire-spewing bugs that threaten all we hold dear. (The story was made into the cult-movie Bug, produced by William Castle and directed by Jeannot Szwarc.) 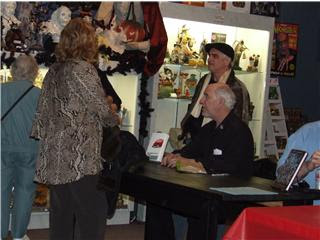 Hanging out with Tom that day was another cult phenom, Peter Atkins, one of the geniuses behind the Hellraiser movies, based on the books of Clive Barker. (Peter pleads not to be confused with the Oxford professor of the same name, although that guy's popular books on the physical sciences are selling well, and a confusion about where to send royalty checks might help temporary cashflow!) 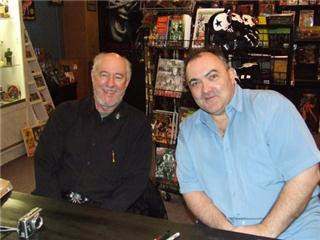 Gerald Everett Jones is the author of My Inflatable Friend: The Confessions of Rollo Hemphill. He blogs on comic fiction at Boychik Lit.
Posted by daboychik at 4:04 PM