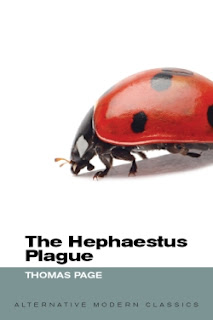 My Boychik Lit blog is supposed to be primarily about male-centered comic fiction. However, my own reading tastes are much more eclectic. And besides, I'm hard at work finishing the manuscript of Rubber Babes, and it's not a good idea for a writer to be doing his recreational reading in the same genre.
Then, too, the friends and acquaintances I've made in the community of authors hail from every corner of the literary map. Since I'm often eager to interest them in my work by exchanging reviews, I end up reading all kinds of stuff.
Having cleared my throat (as judicious editors tell you never to do at the top of an article), I can now boldly assert that I intend to comment on The Hephaestus Plague from the boychik's perspective. This will be an unusual direction from which to survey a sci-fi novel. I want to look at this book's sexual politics (as I did recently in my review of Mistress of the Revolution) and its take on the human comedy.
Written in 1974 by my friend and colleague Thomas Page and just reissued by alternative press Trashface, The Hephaestus Plague is an incredibly ingenious, complex, and technically rich sci-fi thriller. That's because Tom has always been fascinated by entymology--he's a bug freak. If it crawls or slithers or hisses or stings or bites, he wants to study it. So, right off, it's a guy thing. The stereotypical female won't be in the same room with a spider, much less be delighted if one scampered over her body. Tom, on the other hand, has been seen at book signings posing with a friendly tarantula on his arm.
The "bug science" in this book is impressive. And that's an understatement. Tom gets inside the head of researcher James Parmiter, who becomes so engrossed with finding the causes of a hellish invasion of fire-starting bugs that he fills his house with the critters, unplugs the phone, and locks the doors. Then he proceeds to foster-parent them like so many wayward children--to the point of communicating with this alien species in a way no human has ever achieved.
But let's get back to the sex. This story is not just a guy thing--it's an all-guy thing. There are no significant female characters in this book. In the jargon of the movie business, there are a few "walk-ons." The two notable ones are a farm wife and a suburban housewife. Both live in their kitchens and make things for their dominant males to eat. And, of course, they complain bitterly about the bugs, demanding that their protective men get out there and do something. Were this book written today, in the post-feminist era, Parmiter's lab assistant Metbaum would have probably been female (assuming Parmiter himself weren't transformed into a buggy babe). This choice not only would have contributed to gender balance but also would have added an element of sexual tension not unheard-of in the postmodern workplace. A sweaty Metbaum with a swollen chest in a wet tee shirt would certainly change the story dynamics. But Parmiter is such a geek and so intensely focused on the biology under his microscope that he wouldn't notice.
The more significant implication of the book as written is that science, investigation, risk-taking, and intellectual curiosity are essentially male traits. Mind you, I'm not saying that--the book is.
And although female human characters don't figure strongly into the plot of The Hephaestus Plague, the female role in biology is central to its theme. In fact, a female insect (fondly named Madilene by Parmiter) is a star of the second half of the book. She gives birth to an egg case containing a second-generation hybrid strain of bugs that are--and I'm not exaggerating here--capable of replacing humans as the rulers of the planet. (The allusion to Mary Magdalene is apt. Much of the story is set in the rural South, and its fundamentalist Christian overtones figure strongly in the apocalyptic tone of the story. When Parmiter wonders whether God will give up on humans, Metbaum quips that one of the super-intelligent bugs might just be the "next Jesus.")
From the standpoint of evolutionary science and human ethics, the traditional female role of caring for and nurturing the young is pivotal to the plot. Simply put, the bugs seem to be better at it than humans are. Set at the end of the Vietnam era, The Hephaestus Plague is even more lacking in human child actors than in women. The one young boy in the story is mentally retarded. Parmiter is haunted by the historical fact that both Rome and Sparta practiced infanticide in the late stages of their civilizations. As for the bugs, caring for their egg cases is a paramount concern. Ironically, but in keeping with the male-centeredness of the story, it's a male bug that ultimately takes responsibility for the care of Madilene's eggs, and he pays for the decision with his life.
Enough of sex. What about comedy? Well, there is none. Except to say that a scorched-earth sci-fi apocalypse is bound to be campy in the way of the best-worst 1950s B-movies. (It will come as no surprise that one such popcorn flick, BUG, was adapted from this book.)
No, I take that back. God is probably having a good laugh. It's all about adaptation and survival. It's incredibly arrogant for humans to imagine that they are the masters of the Earth. Tom Page reminds us that Nature is always experimenting with what comes next. But we might not be included in those plans. Death is essential and inevitable.
And, you guys will be pleased to learn, so is sex!
Posted by daboychik at 2:02 PM

I love the cover of this book. But no women in it? What was the author thinking? Was he thinking at all?

I must say that when I was discovered the genre of boychik lit, I assumed that it would be oblivious to women's issues.

You proved me wrong in this regard by your insightful review of Mistress of the Revolution. Indeed there can be no boychik lit without women.

I am getting to know Rollo better...

Indeed, Rollo is fascinated by, obsessed with, women. But he has no idea how to "be himself" with them. So he is a schemer without malice. Billy Liar. That's becoming even more apparent to me as I'm getting into Rubber Babes. As Rollo matures, his lies are not mere pranks, have more serious consequences.