Ms. Cherry Tops DIY as Gerald Wrestles with the Devil 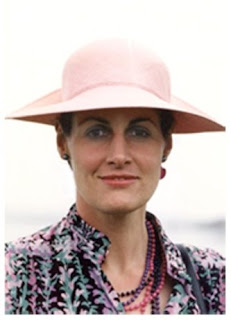 Great good congrats to Brit author Rowena Cherry for winning the top award in the DIY 2008 competition for Romance Fiction. The book is Insufficient Mating Material. I haven't read it yet, but I'm told it has something to do with sex with galactic commanders and space aliens?!

Rowena's photo on the GoodReads site shows her in her trademark hat, and I bet she has more than one. 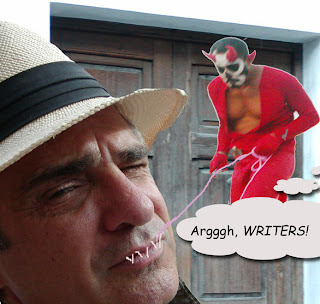 Seeing that pert hat made me think of a photo of me in a hat, as I was being inconvenienced by one of my harsher critics.

And seeing this cartoon again made me think of Rubber Babes. In Chapter 1, Rollo denies the existence of Satan, and in Chapter 2 a stereotypical Dr. Strangelove character--Dr. Dieter Zittpopper--shows up to dog his steps. Now I'm not getting all metaphysical here, but the notion there's a part of ourselves that seeks our own destruction is a concept worth respecting. It might not sound all that funny, but watching Rollo go splat does have its lighter moments.
Posted by daboychik at 10:48 AM No comments:

My longtime friend and colleague Gary Palmatier, the world-class book designer, got a bad case of fascination with my Rubber Babes book and started trolling the net for anything he could find on the topic (intellectual curiosity, I'm sure). Anyhow, he sent a link to this video. Apparently some guy in Japan is shacked up with a hundred or so life-sized dolls. Until now, I thought these things were a recent Hollywood special-effects-technology invention, but apparently the clever folks on the other side of the Pacific Rim have been refining their designs for decades. And, as if the concept itself isn't unreal enough, check out the models with Anime faces. Now you can really step into that Virtual Reality and get up close and personal with your favorite action heroines!

Posted by daboychik at 2:08 PM No comments: 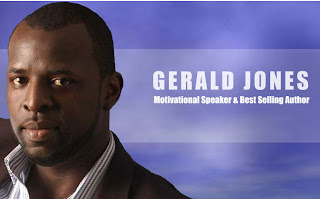 BTW Gerald means spear shaker, which is another tantalizing clue that "Shakespeare" was the pen name of Gerald Francis Bacon. And every male knows that shaking your spear might or might not be impressive, but be warned it will almost always get you into trouble.
Posted by daboychik at 1:14 PM 3 comments:

Book Review: "A Fragment of Fear" by John Bingham

I needed some diversion from the chores of book promotion for Rubber Babes. Frankly, I'd much rather be reading or writing than talking about doing either. Anyhow, I've always been partial to spy thrillers, even though I've never written one, and I was intrigued to learn that John Le Carré had recommended Bingham as an underrated craftsman of the genre. I had no other reason for picking up this vintage 1965 book, but, as it happens, its similarities to some themes in Rubber Babes are remarkable.

A thinly disguised version of the author is the book's main character and first-person narrator. James Compton is what some Brits call a "total shit." Oh, it's not that he's unscrupulous or dastardly. He's just cold, aloof, obstinate, egocentric, and vain. And, in his profession as writer of true-crime stories, he's both inordinately curious and tenacious. In this book, he obsesses on finding the motive behind the murder of a woman he barely knows--until he has literally made it all about him, to the point of mortal danger.

In repeated fits of paranoia, Compton develops complex theories about the forces of evil he fears are converging on him. Although most of his conclusions turn out to be wrong, his basic fears prove to be more than justified. The bad guys really are out to get him. He's just wrong about who they are and why they want him dead.

"Paranoia is just a heightened state of awareness," quips Rollo Hemphill bravely in Rubber Babes. Like Compton, the bad-boy genius overthinks everything, including that government operatives are after him, with similarly miscalculated results.

The essential difference is that Bingham hopes to bring a chill to your spine, whereas I just want see beer spew out of your nose.

Posted by daboychik at 8:45 AM No comments:

The first book of Rollo Hemphill's confessional saga, My Inflatable Friend, has one of those multifunctional titles. It could and does refer to 1) the main character's swelling ego, 2) a rubber doll he uses in a lame ruse to make his girlfriend jealous, and 3) other body parts that swell on stimulation.

Rubber Babes as a title likewise has its multipurposes. Marking the second installment of Rollo's misadventures, the title could equally mean 1) real, fleshy women as sex partners for whom use of a prophylactic is mandatory, 2) synthetic women, or sex dolls, employed for various purposes the most significant of which is conversational, and 3) the surprising resilience of the feminine personality.

The chapters are short, but the effect is enduring. Go ahead, take a look.

Posted by daboychik at 6:58 PM No comments: