$50 off Kindle! Enter OPRAHWINFREY as coupon code on checkout (until Nov. 1).

And just in time for the holiday shopping season. Yeah, everybody is saying that the device is pricey, but so is iPhone. If you figure the per-copy cost savings on books is around $15, the Kindle will have paid for itself when you've bought 20 books.

I'm not objective on this, of course, because both of Rollo's misadventures are available on Kindle.

Speaking of the commercial silly season, recent developments in the global financial community bear out the wisdom of Rollo's quip, "Paranoia is just a heightened state of awareness."

Posted by daboychik at 11:02 AM No comments:

I Am So Not This Guy Either!

Jerry Jones owns the Dallas Cowboys. Now, despite the fact that I answered obediently to "Jerry!" throughout my boyhood and considerably afterward, it's Gerald Everett Jones who created Rollo Hemphill and coined boychik lit as an alternative to Warren St. John's unfortunate term fratire.

Posted by daboychik at 5:06 PM No comments: 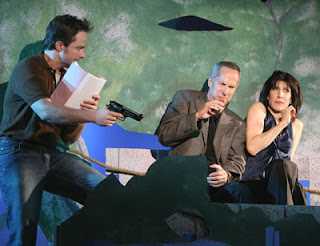 The Edgemar Center for the Arts in Santa Monica is running a new screwball-comedy play about a pair of screenwriters who resort to desperate measures to get a meeting. All in good fun, but please don't try this at home. Read our review here.

Okay, and here's the sexual political angle: The writer pair in the story think they need to sell their "baby" script before they can afford to get pregnant for real. They pester a producer pair, a power couple who are now estranged but still sniping at each other. In reality, the producer pair is the writer pair that wrote the play (cringing in the photo).


(Photo by Michael Lamont)
Posted by daboychik at 10:05 AM No comments: 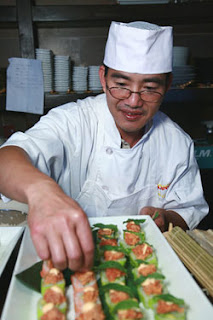 Relentlessly pounding our beat for LA Splash.com in search of la nouvelle experience, we stopped into the new Wokcano Santa Monica. And lest you think washing down sushi with a couple of Martinis has nothing to do with sexual politics, head over there after work for happy hour with your posse and join the debate! (Restaurant review here.) 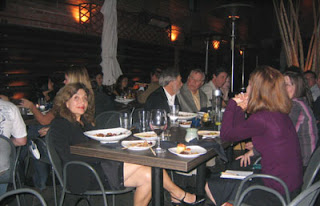 Posted by daboychik at 5:44 PM No comments: 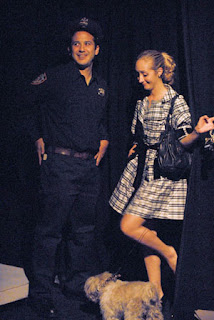 We've expanded our LA Splash critic's beat to include theater as well as opera. No sooner did we venture out than we ran smack up against another opportunity to debate sexual politics. Rick Pagano's new play running at the Lex Theater in Hollywood is a two-character rollercoaster ride, madly bumping along with the ups and downs of a new intimate relationship.

And from the sparkling, spot-on dialogue, Georja and I suspect Rick found some way to bug our house! Click here to read our review.


(Photo courtesy Girlvision)
Posted by daboychik at 9:23 AM No comments:

Once More with Paula B!

The boychik and Paula B had great fun talking about George Costanza and paranoia as an engine of comedy in the Rollo Hemphill stories. But the discussion went on longer than your typical podcast bus-ride, so we're offering a shorter, sweeter version of it here (free MP3, about 10 minutes).

You won't find this podcast on my new Ourmedia / SpinExpress profile, cuz when Paula says she'll host you, she means it! Enjoy our yakfest, post your comments about male-centered comic fiction, and while you're at it drop by The Writing Show to check out their cures for frustrated scribblers.
Posted by daboychik at 8:57 AM No comments: No, that's not Georja and Gerald dressed for a costume ball. It's soprano Liping Zhang and tenor Franco Farina singing their hearts out in LA Opera's current production of Puccini's Madama Butterfly. We took some playful swings at Robert Wilson's austere staging in our review for LA Splash but ended up following the Hyper Critics oath and ultimately did no harm. Click here to read what we said about our experience on opening night.

And lest you think this is far afield from boychik lit, go see it and then tell me its not all about sexual politics (albeit in 1904).

Mixing metaphors for fun and philosophy: If Wilson's concept for set and costumes remind you of Star Trek, who are the Klingons? (Hint: They sail in on the gunboat U.S.S. Abraham Lincoln.)

Navy Lt. Benjamin Franklin Pinkerton sings in Act I (very loose translation from the Italian), "We Americans go all over the globe, screw the locals, take our profit, and never mind the risk. In fact, wherever there's a risk, that's where we drop anchor."

Most of my radio/podcast interviews and recorded book readings from My Inflatable Friend and Rubber Babes can now be found on Ourmedia, which you can access easily through SpinExpress. These are all free MP3 downloads. Click here to choose a podcast.
Posted by daboychik at 3:10 PM No comments: