Reading at Barnes & Noble at the Grove (LA)
January 25, 2009 02:00PM
Barnes & Noble at the Grove, 189 Grove Dr. Suite K30, Santa Monica, CA, The United States
http://www.iwosc.org
Gerald will read from the forthcoming third comic novel in the Rollo Hemphill series, "Farnsworth's Revenge: Rollo's End." His reading is part of IWOSC Reads Its Own, sponsored by the Independent Writers of Southern California.
Posted by daboychik at 9:35 PM No comments: 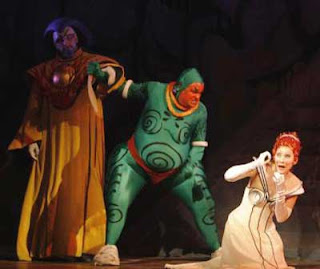 Masonic ritual is fun and games! A flute and a few bells are potent weaponry against villainy! Enlightenment is a stroll through a translucent pyramid!
Life is paradox, and paradox is just damn funny.

Read all about it here.

The Freemasons were not exactly latter-day feminists, but at least in this production, the princess joins the prince as they both scramble to the top of the pyramid of wisdom. 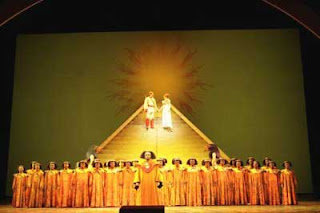 (Photos by Robert Millar courtesy LA Opera)
Posted by daboychik at 10:42 AM No comments:

On New Year's Eve, Georja and I took in Pink Martini's performance at the Walt Disney Concert Hall. You can read our review for LASplash.com here.

Besides obvious musical virtues we mention in our review, I want to give Pink Martini credit for their business savvy. They've released three successful albums so far, all under their own label (Heinz Records, named for artistic director Thomas Lauderdale's late, beloved dog). So even though their CDs have sold hundreds of thousands of copies, this world-touring band is not answering to one of the big music labels. Like the best small-press book publishers, they are actively engaged in -- and apparently profiting from -- what I like to call "garage-band marketing."

A further thought in this New Year: In just a few years, Pink Martini has done a beautiful job of inventing itself as a "little orchestra," including building a well-deserved reputation for both musical virtuosity and originality. And they are perpetually reinventing old music genres like torch songs, Latin ballroom, and club tunes.

So I commend them to you not only as artistic but also as lifestyle role models.

Because it's going to be a year when we all need to think hard about reinventing just about everything in our lives just to cope! 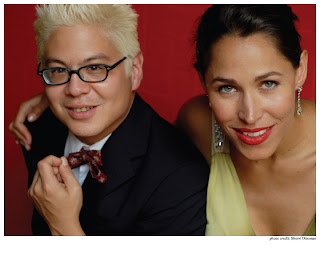 Pianist-composer Thomas B. Lauderdale and lead vocalist-songwriter China Forbes of Pink Martini.
(Photo by Sherri Diteman courtesy Pink Martini)
Posted by daboychik at 6:31 AM No comments: