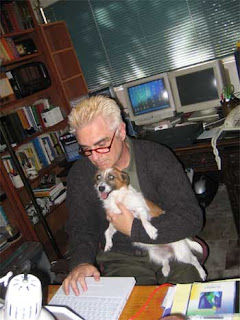 (Santa Monica, CA - March 21, 2009) In an unexpected confession today that stunned the publishing world, comic novelist Gerald Everett Jones admitted that he is not the author of the books that bear his name.

When confronted by an investigative reporter for the Daily Bloodhound who'd picked up a whiff of scandal, Jones claimed that he has established an exceptional and highly collaborative telepathic bond with Zucchero (aka Zookie), a ten-pound broken-coat Jack Russell terrier.

"A lot of dog guardians are sure their pet understands everything they say, even knows what they're thinking," he said. "With us, the literary conversation is obviously in the other direction."

"She tells me what to write," he revealed. "It's just that simple. You could think of me as a stenographer or a personal secretary. For years I wrote nonfiction books and technical articles. Does anyone really believe I could suddenly be all that funny?"

Jones has difficulty, however, explaining the breadth and depth of the sophisticated world view and literary allusions in My Inflatable Friend and Rubber Babes, the first two books in his Rollo Hemphill series. (Jones maintains that his boychik lit is "hipper fratire.") "Yes," he said, "there's no doubt Zookie must be very well educated, besides having an uncanny sense of the comedic. But I've never seen her crack a book. She does watch some television, mostly Animal Planet and those six-dollar burger ads." Asked how the little dog came by all that knowledge, Jones surmised, "She was a rescue. So there's an unexplained time gap. I'm guessing she studied at NYU, maybe U of Iowa."

They are currently hard at work on the third installment, Farnsworth's Revenge: Rollo's End. "We work well together, and she pretty much gets her way. But she can be bossy. Sometimes I have to remind her there's no need to bark."
Posted by daboychik at 6:42 PM

Just wanted to let you know, Gerald, how funny I think you are!!! Love your posts and tweets!!!