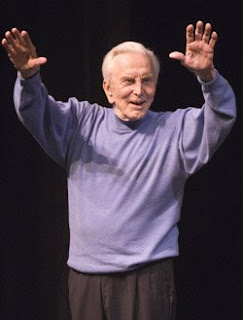 Amazing how far a guy can go with a dimple on his chin and a wickedly playful sparkle in his eye.

Georja and I took in his one-man show Before I Forget.

And speaking of sexual politics, 92-year-old Douglas has been married to his beloved Anne for more than a half-century now. He'd been married once before, and first wife Diana (mother to Michael and Joel) left him when she found out he'd strayed. Later, Anne was his assistant and language coach on a movie shoot in Paris. For his birthday, she threw him a surprise party - attended by most of the women he'd dated there, "including the one I'd been with last night."

He goes on to marvel, "How do they always know what we're doing?"

Which leads me to wonder, why isn't the head of Homeland Security a woman?

You can read our review for LASplash.com here.
Posted by daboychik at 11:14 AM