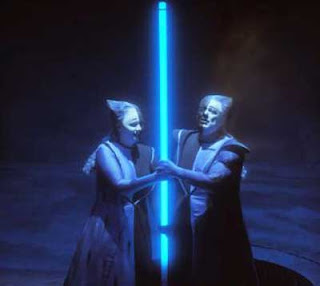 Last Saturday night, Georja and I did our habitual gig stringing for LASplash.com and took in almost five hours of Die Walküre, the second installment in Richard Wagner's "Ring Cycle."

When I mention these exercises in cultural appreciation in this blog, I try to find some linkage to the theme of sexual politics to justify taking up space here. In the case of this opera, the accompanying press photo says it all. Designer-director Achim Freyer has Sieglinde (Anya Kampe) and Siegmund (Plácido Domingo) costumed literally as two halves of a whole. In the story, Siegmund is the mortal warrior-son of top- god Wotan, and, unbeknownst to Siegmund at first, Sieglinde is his estranged twin sister. To complicate matters, Sieglinde is married to the broad-chested, narrow-minded Hunding, who conveniently for the sake of dramatic conflict happens to be a loyal member of a clan that has sworn death to Siegmund.

So when battle-weary Siegmund literally stumbles onto the cozy hearth of Sieglinde and Hunding -- infatuation, recognition, love, adultery, incest, procreation, and death occur in rapid succession.

By all rights, Siegmund should be able to simply take what he wants in this situation. He is, after all, Wotan's son, and he is as certain as she is that Sieglinde is the only one for him. And to add to his worthiness, he is the only one who can pull the magic sword out of the ash tree in Sieglinde's backyard. The sword has defied all comers until now, having been stashed there by Wotan years ago against just such a needful contingency.

So it is doubly unfair that Wotan intervenes in the inevitable battle between Siegmund and Hunding, breaks the magic sword with his even-more-magical spear, and leaves our unfortunate hero exposed so he gets Hunding's knife in the back. And dies, as mortals do with such dramatic flourish.

Why did Wotan betray his son? Two reasons: First, because his wife Fricka (goddess of marriage) says the order of the universe won't be preserved unless the adultery-incest is punished. Second, because Siegmund's demigoddess half-sister Brünnhilde has defied Wotan and tried to save the young man -- another defiance of the natural order that keeps the gods in power.

But the story doesn't end there. One of Siegmund's lucky thrusts has made Sieglinde pregnant. After the expectant father's death in the battle with Hunding, Brünnhilde rescues and shelters Sieglinde. In the next installment of the Ring Cycle, baby Siegfried will grow up to become a powerful warrior himself, and he will rescue Brünnhilde from the bonds of Wotan's condemnation.

And those two will hook up. (Wagnerian audiences apparently didn't need the explanation, but let's just say Brünnhilde is placed in "suspended animation" so she's not an old hag by the time Siegfried is old enough to lust after her.)

What's it all mean? You could say that the universe really doesn't care much about human preoccupations with morality. Squeezing out the optimal next generation is the important thing.

Hitler was supposedly a big fan of both Wagner and his telling of this story. He wasn't much concerned with morality either.

If this isn't grist for sexual politics, I don't know what is. You can read our review of Die Walküre here.
Posted by daboychik at 4:44 PM