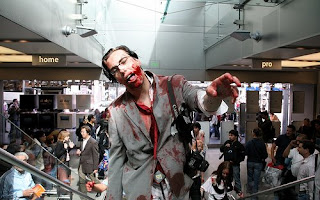 Boychik lit and its nastier cousin genre fratire are both skewed takes on the romantic comedy, or rom com. So the blurb for Breathers hooked me, "... a romantic zombie comedy (rom-zom-com, for short) that will leave you laughing, squirming, and clamoring for more."

Now, despite their body temperature, zombies are hot these days. I figured I was a newbie to the genre, but then I realized that Michael Keaton played a zombie in Beetlejuice, as did Meryl Streep and Goldie Hawn in Death Becomes Her. And this zom-lit book specifically acknowledges its legacy from Invasion of the Body Snatchers. (About all I remember from that black-and-white movie is the delicious piece of trivia that they used animal parts from a butcher shop and smeared them with chocolate syrup for the icky, sticky blood.)

So, like so many commercially successful story formulas, zombie lit is a new idea that's stood the test of time.

I was both disappointed and pleasantly surprised by Breathers. The scum-sucking horndog in me was disappointed there wasn't any explicit sex. You know, pointers on how to hit climax before your member falls off? There is a romantic plot line, but it's a subplot and a minor one, at that.

On the other hand, the geeky snob in me was gratified to find "redeeming social value" in the book's themes. I suspect a reason for the popularity of zom lit with young audiences is that the state of zombitude is a handy metaphor for teenage angst. (Author Scott Browne tweeted me that, no, teenage distress is a metaphor for being undead, but let's not quibble.) In Browne's plausible-realistic fictional world, zombies try to fit into middle-class suburban Silicon Valley society. They go to twelve-step groups for counseling, and when they backslide, otherwise screw up, or are simply spied by humans ("breathers") in a public place, the animal welfare wagon collars them, and some responsible person has to post bail to spring them from the pound. And as with unfortunate animal strays, you do not want to know what happens to them if no one shows up to take them home.

Zombies are shunned, reviled, and -- most politically troublesome for their survival -- prohibited from reactivating their Social Security numbers. Yikes!

You could also compare the unfortunate plight of zombies to that of other "protected classes," and suffice it to say the author has thought of that. As a rule, teenagers do not go political to redress their grievances, but Browne's zombies do.

As I believe I picked up in Silence of the Lambs, the theme of cannibalism versus vegan ethics comes up. (I don't know what to say about it, other than that economics will ultimately decide the question for humans in the real world. Expenses of land use, water, and energy will eventually drive the cost of meat so high that most people will become de facto vegetarians for economic rather than ethical reasons.) One of Browne's zombies was a vegetarian when he was a breather, and let's just say he has trouble making the transition.

I'll stop short of throwing in the big spoiler here, but there's a whopper. Just remember, zombies will be zombies. Browne seems to say, if they can embrace that fact, they will be happier. But as long as you're a breather, you won't be.

Posted by daboychik at 9:57 AM