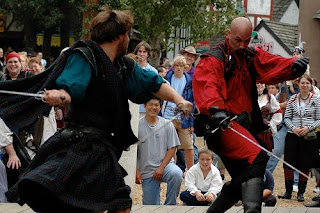 Photo by Jeff Kubina
http://www.flickr.com/photos/kubina/ / CC BY-SA 2.0
A writer friend and colleague of mine recently complained in the IWOSC forum that his press release had mysteriously appeared on a strange website. Here's my (cross-posted) reply:

"The situation you find about your press releases being posted on other blogs has happened to me quite a few times.

I'm not an expert in these matters, but my interpretation is this. Your PR release is essentially a public document because you've put it on the Web with the express purpose of inducing anyone who is interested to spread the news. It's certainly not unheard of in the news industry for a publication to simply run a lot if not most of the text of a release as an article. It's lazy journalism, but the original poster hardly complains because you're getting what you want -- your story out to the world.

But what's happening here is that these blogs are content whores. They surround themselves with click-thru ads and promotional URLs. They know that search engines seek out pages that change frequently. So they seek out content they can lift, any content, even it it's dated. For example, my release that I'd be reading from my novel Rubber Babes at Dutton's keeps getting reposted, even though Dutton's is long closed.

If you find that the other website has links to objectionable material, I'd say you're within your rights complaining to the webmaster and asking for the post to be removed. Some of these sites appear to be offshore so I wouldn't bet on them taking any action, but it's worth a try.

If the item did not originate as a press release -- say, it were a post on your own blog -- then this "cross-posting" without your permission would be a copyright violation, I believe. But when you're putting it out there as a release, its getting recycled is not necessarily a bad thing from the standpoint of your exposure. You just don't want to get into a situation where links to your own site get blocked because somehow the search engines have "associated" you with inappropriate content. For example, if you try to post an article on ezinearticles.com, they might block it if they think your links back to your own site lead, in turn, to nasty places."

Author of the Rollo Hemphill novels
- in paperback and ebook -

Posted by daboychik at 5:03 PM No comments:

In the virtual scheme of things, my comic-novel hero Rollo Hemphill is now twentysomething. So it might at first seem odd that I'd review a book about a curmudgeon. Perhaps Anne Tyler's sixty-one-year-old Liam Pennywell is simply Rollo in flash forward, a boychik who wakes up one morning to find out his youth is so yesterday.

Here's some brief background, no more than you'll read in publicity blurbs: Liam is teacher in a private school in Baltimore. He was trained in philosophy and his academic credentials far exceed the mundane requirements of his job. Then he loses his job. Soon afterward, he has a traumatic experience that requires healing and readjustment. In the process (the length of the book), he regains his bearings. Hence the title's allusion to the Biblical captain and his navigation device.

Much of life is ordinary, or so Anne Tyler seems to say. And that's the wondrous part of it, she apparently believes. She writes that way and always has, as far as I know. Her sentences are straightforward, spare, honest. The events she describes seem not at all unusual. Her characters are people you know, and they usually don't dare to be the least bit different.

Much of the time, when their lives are proceeding in ordinary ways, they don't surprise you. Tyler is careful to give lots of detail, including ingredients of their lackluster meals and frequent mention of their clothing choices, moods, and physical complaints.

But then the character does something unexpected. In an Anne Tyler novel, it usually doesn't involve picking up a gun or taking an overdose or punching out the most powerful man in town. No, sometimes it's nothing more than a look, an odd comment, or a gesture. But it's the result of a momentous decision, typically something remarkably brave or generous.

Her characters surprise you this way only a few times in each book. In Noah's Compass, you can count those times on the fingers of one hand. But they're stunners. In reading her other books, I have often wondered how as a writer she achieves this effect. When I reread those passages, I can usually find the sentence that marks the revelation or the turning point. But the words are, in themselves, unremarkable. The trick, I believe, is in the meticulous layering of narrative and detail that went before. Some critics have called hers an "angel's eye view" of her characters. Because she loves them so much, even the outwardly nasty ones.

I won't give you any spoilers from the book, because I don't want to deprive you of those surprises. I'll give you an example from my own (ordinary) life. When I was Rollo's age, a young female coworker dropped by my place on a Saturday morning and asked me if I would help her look for an apartment in the neighborhood. I did so gladly. She was a looker, and I welcomed any excuse to get to know her better. After we pounded the pavement all afternoon, as the dinner hour approached, I suggested dropping into the local grocery to get some things we could cook for dinner. It was an Anne Tyler moment when she picked up a carton of eggs and asked:

"Won't we need these for breakfast?"

Learn from Anne Tyler, and stay alert. The ordinary could become wonderful in the blink of an eye.

Posted by daboychik at 10:23 AM No comments: