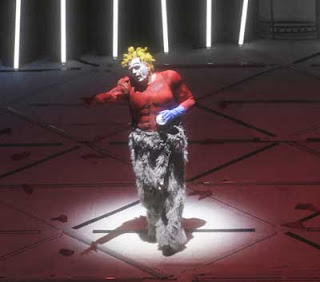 As Wagner fans all over the world know by now, the Los Angeles Opera is engaged in an audacious two-year project to stage Achim Freyer's postmodern version of the Ring Cycle. Having attended the first three operas in sequence, Georja Umano and I just sat through Gotterdamerung, the last installment, which shows the destruction of the gods, in five hours and twenty minutes and two intermissions. Read our review for LASplash here: Gotterdamerung Review - A Thrilling End to the Ring.

I've commented previously in this blog about Wagner's superhero character Siegfried, a demigod in whom the hope of the world seemed to depend. He is a brash, impetuous fellow, very much the boychik, the putz with more chutzpah than brains. He has it all with goddess-babe Brunnhilde, and he blows it. (Her stereotyped character used to be portrayed onstage as a bellowing cow wearing breastplate and horned Viking helmet. In LA Opera's production, Linda Watson softens her considerably, with no loss of vocal amps.)

But back to Siegfried. Why does the hope of the world run onto his own sword?

(That's not a spoiler. He doesn't literally run onto his sword. You have to invest the five plus hours to find out, or find yourself a used copy of Grove's.)

P.S. Los Angeles Opera will present three more cycles of the Ring, starting in late May and running through the month of June.

(Photo by Monica Rittershaus courtesy LA Opera)
Posted by daboychik at 11:28 AM No comments: